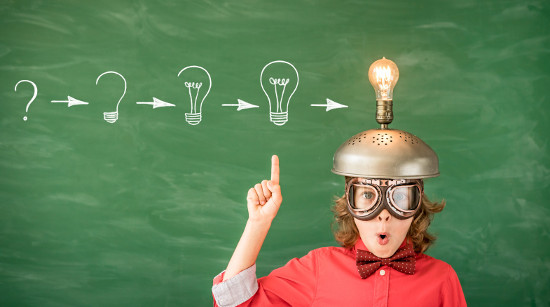 There isn’t an evidence-based investor or advisor around who doesn’t owe an enormous debt of gratitude to John “Jack” Bogle for popularizing index fund investing. He was able to see – and more importantly, stubbornly stick with – a vision of what it could bring to everyday investors, even when his peers were taunting his idea as “Bogle’s Folly.”

Hooray for Bogle; he not only got the last laugh on his detractors, it’s been an incredibly long and lucrative laugh. Well-deserved!

Which brings me to this week’s Wall Street Journal op-ed by Bogle, “Bogle Sounds a Warning on Index, Funds.” In it, he warns of potentially dark days ahead in an industry that could end up being dominated by a few massive fund managers.

Far be it from me to assume Bogle is wrong. There are certainly lessons to be learned from those who laughed at him the last time he stuck to his vanguard guns (pun intended).

That said, I do have a quibble with how he communicated his message. In particular, his data visualization, i.e., the charts and graphs, struck me as disturbingly disingenuous.

If you glance at a thumbnail of this chart (as, alas, so many readers will with the full-size version in his op-ed), your take-away would be that index investing has become the only game in town. 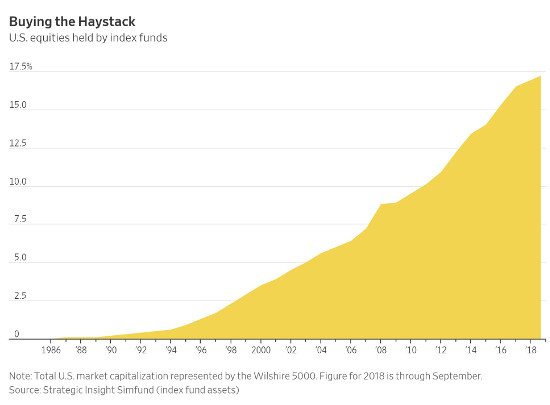 In reality, even if index investing in the U.S. has grown from zero to 17.5% of the market since 1985, that’s hardly a Death Star grip on the industry – at least not yet. To present the data in a more accurate context, the vertical axis should have displayed the growth on an honest-to-goodness, 0–100% scale. Its 0–17% scale is misleading.

The next chart in the article underplays this same reality. Even once you combine actively and passively managed funds held by fund managers who offer index funds, those fund managers still only occupy 36% of the market. That information is there, but it’s not incredibly obvious at a glance. Perhaps intentionally so?

Again, I’m not necessarily objecting to Bogle’s point. Who knows, maybe index fund managers will take over the planet. It doesn’t hurt to contemplate the possibility and be thoughtful about what might be done about it if it becomes a concern.

But as a champion of evidence-based investing and clear communications, I am displeased with graphics that seem more focused on trying to lead (trick?) readers into reaching a desired conclusion, than on properly presenting the data for accurate, objective interpretation.

Call it a folly on my part, but I felt it was important to point this out.